Multi-User Syncing with NO SUBSCRIPTION COST! 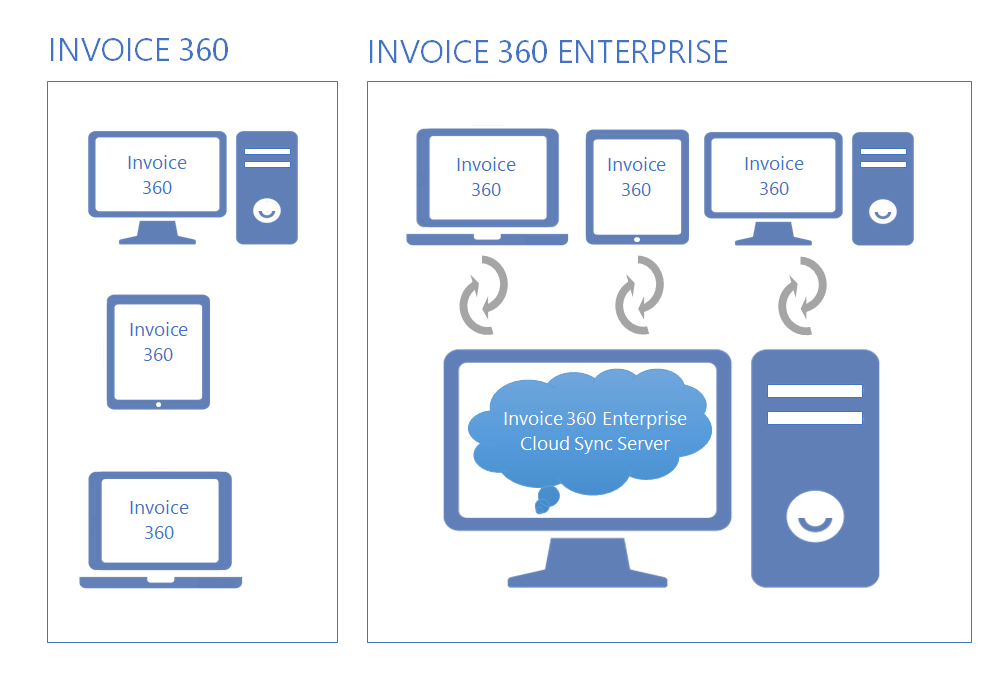 The Invoice 360 app, once synced with cloud server, is available for use even when the cloud is unavailable. This means you have business continuity and are resilient to network failures. Invoice 360 is great for people on-the-go. For example, a salesperson can bring the app to meet customers, invoice them and then go back to office to sync the info to cloud.

What some of our users are saying?

How to sync data across multiple devices in 3 simple steps?

Why should I use Invoice 360 Enterprise?

Invoice 360 Enterprise is an invoice system that consists of Invoice 360 (Microsoft Store app) syncing data with an easy to use self-hosted cloud on your Windows Desktop. It is a new generation of invoice software with modern cloud capabilities that offers many benefits and advantages over other invoice solutions.

Invoice 360 Enterprise is equipped with a cloud server that runs as an executable on your Windows Desktop. This allows Invoice 360 to utilize modern syncing capabilities with a self-hosted cloud server and enables you to save monthly subscription cost.

Invoice 360 Enterprise works like a client/server based system. However, its cloud syncing capabilities allows the app to run uninterrupted even when the cloud server or network is not available. The client app automatically caches all the performed actions and stores the data locally while waiting for the cloud server to be available, before a sync process can happen. You can bring your device containing Invoice 360 out-of-office, to invoice a customer without worrying about connectivity. When you are back in office, you can sync the data on your device with the cloud server easily.

With a locally self-hosted server, you are assured that your data is stored on-premise and do not have to worry about losing control of your sensitive business information. You do not need to worry a third-party company offering you the cloud invoice solution will be accessing your confidential information or if they are doing enough to protect your data.

Invoice 360 Enterprise offers unmatched flexibility in the deployment of the cloud server. Besides providing a locally self-hosted Windows Desktop executable, we also offer the source code of the cloud server on GitHub. This allows you to host the open source server with well-known cloud providers such as Azure by Microsoft, keeping your data confidential and away from the hands of third-party companies.

Ever since the launch of Invoice 360, it has become one of the most popular invoice app on the Windows Store. Invoice 360 Enterprise utilizes the same user interface, perfected over many iterations with feedbacks from many users over these years. We strongly believe the user experience of Invoice 360 is definitely one of the easiest and simplest app for everyone.

We provide Lifetime upgrades to Invoice 360 Enterprise. This means you will not be charged for any upgrades and can continue to save on monthly subscription cost for as long as you like.

How to Sync data across multiple devices in 3 Simple Steps?

If you have installed Invoice 360 from the Windows Store, you can immediately start to use it without any further configurations or setup. Any changes you make will be saved locally on the device. When you are ready to start syncing your data across devices, simply follow the steps below. In general, it involves installing and running cloud server on your Windows Desktop and then setting up Invoice 360 to sync with it.

Please make sure Invoice 360 is installed before proceeding to the steps below.

Go to the Start Menu and locate Invoice 360 Enterprise Server.

Right Click on Invoice 360 Enterprise Server and select "Run as Administrator". The Server requires administrator rights to listen to a specific IP address and port.

Use the default values provided and click on "Start Server". Once the cloud server is started, the addresses it listens on are displayed. In the screenshot below, the server addresses are "http://localhost:8571" (for Invoice 360 on local devices) and "http://192.168.1.110:8571" (for Invoice 360 on remote devices). Please be assured that Invoice 360 Enterprise Cloud Server only listens on PRIVATE subnet addresses. This means only devices running in your subnet (private network) will be allowed to connect to it for syncing. 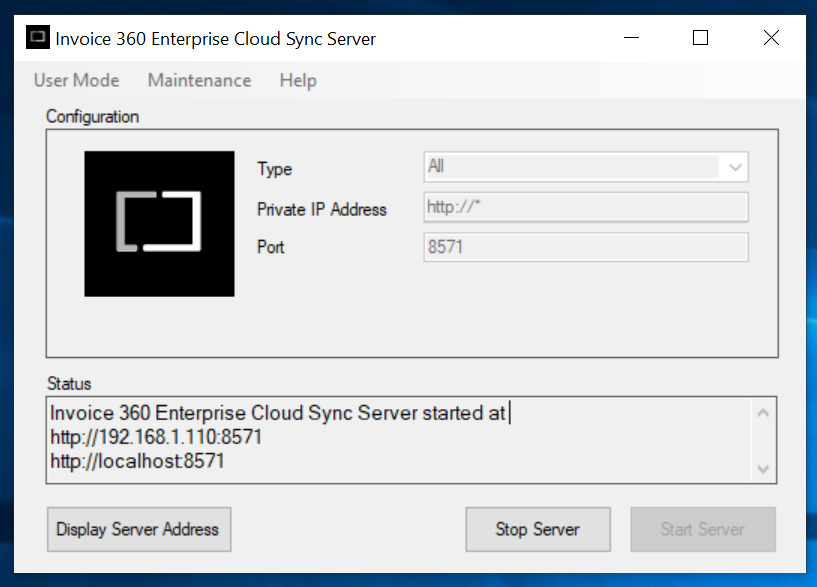 On the same device running Invoice 360 Enterprise Cloud Sync Server, go to the Start Menu and launch Invoice 360. Click on the "Hamburger -> Cloud Sync" menu item, and select "Transfer data to Cloud". This will transfer all Invoice 360 data stored in your device to the cloud server. 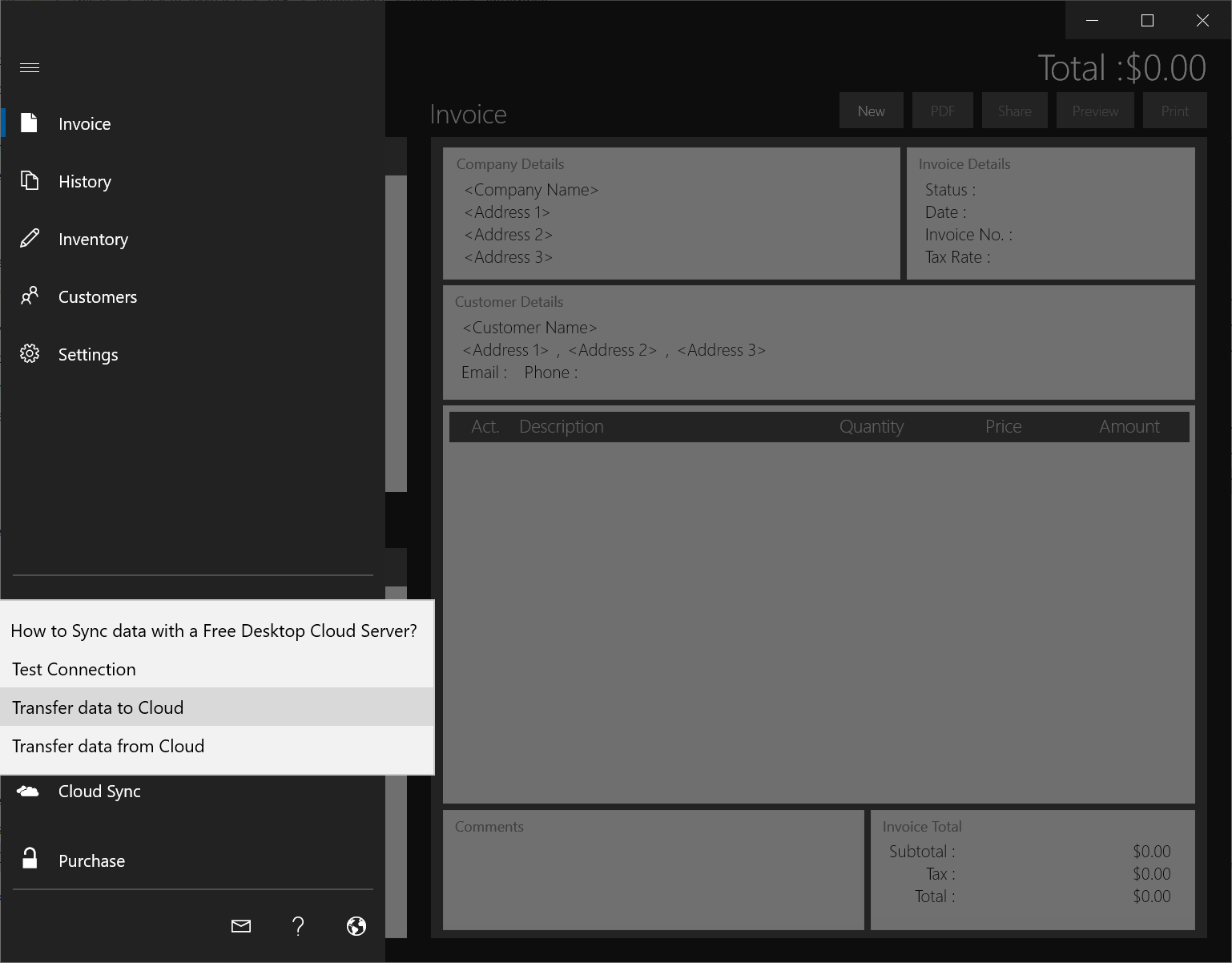 When prompted with the screen below, leave the values as the default and click on “Transfer data to Cloud”. The data in your Invoice 360 app will be transferred to the cloud server and used to initialize the cloud data. You will only need to perform this operation once. 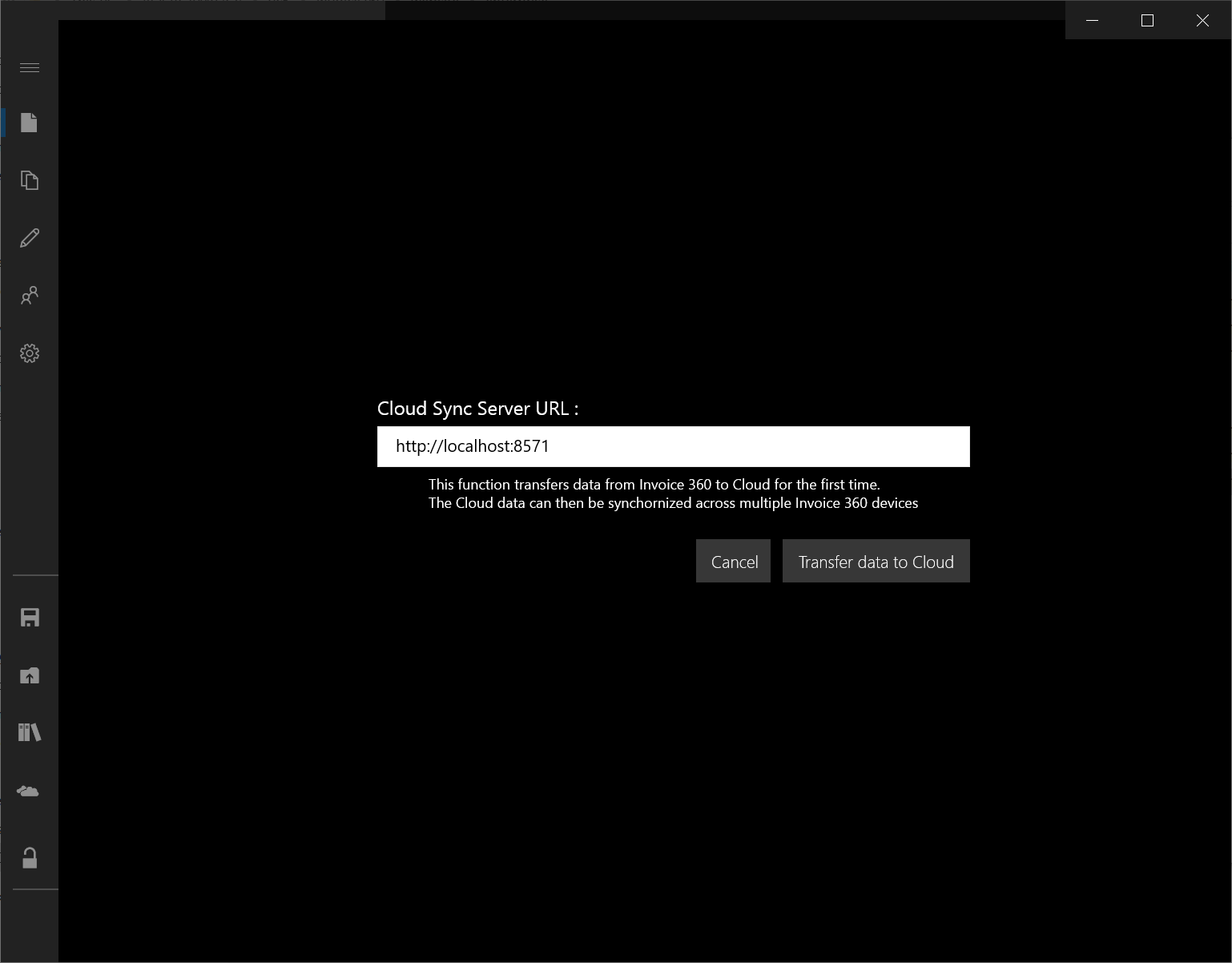 From now onwards, every time you make a change on an invoice or on any other records in Invoice 360, the changes will be saved to your app local database, and automatically synced to the cloud server.

If you need to setup Invoice 360 on another device to sync with the cloud server, check out the Connect Remote Client tutorial.